Diagram for Delinquents Update #30: It Was a Mean Time

I am writing to you from Bangkok, Thailand where I am currently a Peace Fellow at Chulalongkorn University. While here I've been studying violence, conflict resolution, and peace for my research interests in the intersection of these topics and documentary film. As you know, our documentary, Diagram for Delinquents, is a study of violence in the media and its impact on society, specifically the youth in 1940's and 1950's America. I am learning much here and I am also editing Diagram's interviews in my free time.

Here is a little something I slung together to bring you to my side of the world:


As I am on this side of the world, Jason Clarke is on the other side working on the film's animated courtroom sequences.

A few days before I left for Thailand I met Jason at the New York Public Library to discuss the animated sequences in more depth. Visions of Ghostbusters danced in our heads as we discussed the film in hushed tones at a large oak table on the second floor. I am quite pleased with Jason's vision of making the scenes less static and more visual. I am positive you will be impressed and excited by what he is creating!

Below is a clip I pulled of Warren Bernard discussing Wertham, juvenile delinquency, and the zeitgeist of the late 40's/early50's America. As I've written previously, Warren is the Executive Director of the Small Press Expo. He is also a comics expert and historian and has written the article "Bloody Massacre: How Fredric Wertham Public Backlash and the 1954 Senate Delinquency Hearings Threw Comics on the Bonfire" for The Comics Journal. 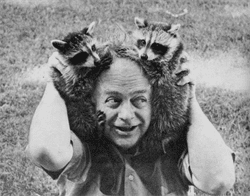 Indeed, as Warren explains, Wertham wasn't the only and certainly not the first critic of comic books. The popular children's book author Sterling North was an early critic. On May 8, 1940 in the Chicago Daily News, North penned the scathing essay on comics he titled: “A National Disgrace." I think that sums up his sentiments quite succinctly.

In the article, North writes, "[Comic books are] badly drawn, badly written and badly printed—a strain on young eyes and young nervous systems… Their crude blacks and reds spoil the child’s natural sense of color; their hypodermic injection of sex and murder make the child impatient with better, though quieter, stories."

Warren also mentions the great American journalist David Halberstam. Mr. Halberstam has had a noted career as a journalist and historian and has received the Pulitzer Prize for international reporting in 1964. As you may have guessed Halberstam's interestingly structured book The Fifties has been a source for our film.