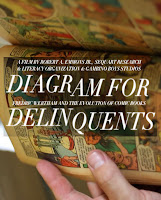 Let me first open with another new promo card I made. I kind of like this one. It has more color than the previous promos and I like the presence of the hand in the image. For me, it really evokes the tactile experience of reading comic books. The feel of the pages, turning them, examining them, pouring over them, it can't be replicated. That has always been a special part of reading comics for me.

I prefer the experience with the comics of my childhood. The ones printed on newspaper pulp. The pages of today's comics are slick and sheen. Don't get me wrong, they're quite beautiful, but nothing feels like the old paper.

The crew is excited to be traveling to upstate New York this week to interview Dr. Steven J. Kirsh at SUNY Geneseo. Dr. Kirsh will be featured in the film discussing media, violence, youth.

He has a two-fold contribution to the film.

Dr. Kirsh will provide a critical look at the research on media and the youth. And even more specifically, he has written about the work of Dr. Fredric Wertham, so he will be commenting on him and sepcificially Seduction of the Innocent. I am greatly looking forward to hearing what he has to say.

For the past week I have been trying to get another interview in the hopes to announce it today, but things have been proving difficult.

To be more specific, I have been trying to locate someone that was around during the comic burnings of the late 40's/early 50'sm, specifically in New York state (Auburn and Binghamton). Every time I get a good lead, I get no response or a dead end. I'm starting to wonder if it's going to happen or not.

So... since I haven't been able to locate anyone yet, I made this video promo. It's a bit sensational, but I think it conveys some of the hysteria of that period. It's called, COMMUNITY:

VIEW HD VERSION ON RAEMMONSJR'S YOUTUBE CHANNEL
Posted by Robert A. Emmons Jr. at 8:23 AM