I have some great news to announce this week.

First, the crew and I are traveling to visit Broadcast Thought in Los Angeles. This group of three physicians will play an important part in the film's segment on media, violence, and children. 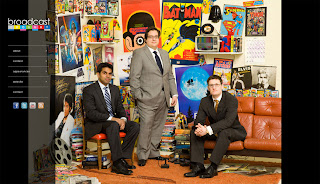 The Broadcast Thought website does an excellent job describing who they are and what they do, so please visit it here. In brief (from their website):

"Broadcast Thought is a group of three physicians, specializing in forensic, child and adolescent, and adult psychiatry, who provide expert consultation to the media and entertainment industries. At Broadcast Thought, we are both medical professionals and fans of film, television, comic books, and other mass media. We add new dimensions to portrayals of mental illness, evolve perceptions of mental health matters, and advance popular media in innovative directions. Broadcast Thought’s goal is to provide “Accuracy in Entertainment and Entertainment in Accuracy.”

Second, two very important names in comics history have agreed to appear in the film. When the crew travels to L.A. in the first week of August to interview the doctors of Broadcast Thought, we will also be visiting with Mark Evanier and Jim Trombetta.

We are thrilled by this opportunity. Both men have made substantial contributions to the field of comics. Mark Evanier is a comics creator, historian, and journalist. He brings another element to the story as well. As a youngster, Mr. Evanier was involved in the world of fanzines and had a very interesting correspondence with Dr. Wertham! You can read about it in his book Wertham was Right!.

Jim Trombetta has compiled a compelling anthology of those early horror comics that are so important to my story. Also, in his book, The Horror The Horror, Mr. Trombetta provides a very lucid analysis of the time period that surrounds these creepy comics.

So, needless to say we are looking forward to a fruitful trip out west as we gather more material for the picture. 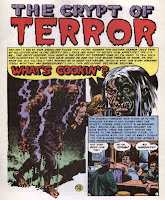 Finally, I have another teaser clip from the film. If the below clip doesn't make your comics taste buds water you may be more similar to the walking corpses that appeared in many a comic book page than you thought!

It was so special to spend time with Stephen O'Day. When he opened his collection to us, it was as if history had opened its chest to reveal its beating heart. It was real, tactile; it was the pulp that gathered time on its pages and let us hold it. Material history is living history. It's organic. It gives you arms to the past. And that is not lost to us documentary filmmakers. 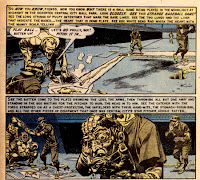 In seeing those "all in color for a dime" original comic books and holding them next to Dr. Wertham's Seduction of the Innocent we were transported to the day that Wertham observed them for himself. Without being trite... it was magical.

Once again, that concludes this week's update. It is our hope that with each week your excitement and interest builds for the film, just as it does for us!

As we say around the DfD office: MORE IN A WEEK!
Posted by Robert A. Emmons Jr. at 7:15 AM