Hello supporters and interested parties. It's been two months since I've posted an update, but let me assure you, there isn't a week that goes by that I'm not working on the film in some way.

While being a documentary filmmaker, I am also a professor and assistant dean at a university, and a father. I wish I could dedicate all my time to the film, but that's not possible. My last film took two years to complete, the one before that took three. Diagram for Delinquents has been an incredible experience. It has taken me to California, New York, Montana, Maryland, Delaware, Illinois, Indiana, Ohio, South Carolina... I've been able to interview an oustanding set of subjects including:

Mark Evanier (Comics writer and Author of Wertham was Right!)

I apologize if you feel things are moving slowly, but I must say, I will not release a film that I feel is not complete. This story has taken many turns and new revelations are happening almost daily. Just in the last two months new findings have caused more controversy, solidified theories, and have given rise to new questions. This story is still evolving! This is exciting!

With that being said, I think the finish line of principal photography is in sight. What should be the final interviews will be taking place this March.

I am very pleased to announce that we will be interviewing Warren Bernard this Sunday. Many of you will know Mr. Bernard as the Executive Director of the Small Press Expo. Warren is also a comics scholars and historian and has very recently written an expertly researched article that explores how the Senate Subcommittee on Juvenile Delinquency came to fruition ("Bloody Massacre: How Fredric Wertham Public Backlash and the 1954 Senate Delinquency Hearings Threw Comics on the Bonfire"). It was published in the latest Comics Journal. The journal's website has posted all of the article's citations : Warren Bernard’s Citations and Fredric Wertham Documents.

Mr. Bernard's interview will be followed a week later by Amy K. Nyberg, author of The Seal of Approval: A History of the Comics Code. This interview has been a long time in coming. We always knew the film was incomplete without Dr. Nyberg's input and we have finally been able to schedule it. Her book was one of the first to look at this period of comics history.

And finally, we will be interviewing Carol Tilley two weeks later. Dr. Tilley's newest research was published in Information & Culture: A Journal of History. Her article, "Seducing the Innocent: Fredric Wertham and the Falsifications that Helped Condemn Comics" has received much attention in the last two weeks as she has found evidence that Wertham manipulated, changed, and fabricated data for the publication of Seduction of the Innocent. As I mentioned early, with the opening of Wertham's archives, new information is presenting itself.

Lastly, as I have mentioned in the past, Diagram for Delinquents will incorporate animated sequences that use the actual court audio from the Senate Subcommitee Hearings on Juvenile Delinquency and Comic Books. Animation is a difficult, tedious, and time-consuming process. Luckily we are working with an animator whose talents are worth the wait! Hailing from Brooklyn, NY, Jason Clarke brings an aesthetic that really moves the animated sequences into the realm of comics. Jason is a designer, animator, illustrator, everythingator and this really brings a cohesiveness to his work. Please see more of Jason's work at his website: THIS IS JASON.

Just this week we received a rough version (there are missing elements and movements that will be in  the final version of this clip, as well as the remainder of the sequence) of one of the film's sequences.

In this clip we can hear and see Wertham testifying about the gruesome horrors in the comic book Mysterious Adventures #20. [I once again have the endless resource of all things Seduction of the Innocent Stephen O'Day of http://seductionoftheinnocent.org to thank for citing this. If you haven't visited his site, you MUST! Thank you again, Steve. You're a genius.] The story in this issue that Wertham is referring to is "Chef's Delight." Wertham isn't overstating here... It's quite grisly! Have a look. Here is the issue's cover and the final page which is what Wertham is drawing from (Click on image to enlarge):

It's followed by an interesting exchange with Kefauver.

Here is a court room photo of Wertham at the witness table giving testimony to the presiding Senators and other court officials. 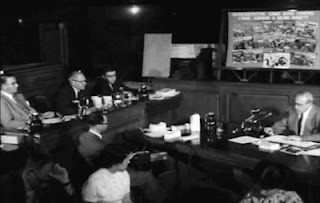 WERTHAM
Now, this is a heroine. This is a woman who kills a man. You see, he has blood coming all over the man's face and she says, "I want you to suffer more and more and more and more."
Then the final triumph, she takes this man's organs and serves them up as dishes like a housewife and you see her "famous fried brains, famous baked kidneys, famous stuffed heart."

Next to that is the remainder of this man.
All I say is that quite apart from the disgust that it arouses in us - and I am a doctor, I can't permit myself the luxury of being disgusted ─ I think this kind of thing that children see over and over again causes this ethical confusion.

KEFAUVER
That seems to be the end of that comic book story.

WERTHAM
Yes. I should add that it says here, "The End." "The End" is this glorious meal, cannibalism.

KEFAUVER
So it did not have a very happy ending.

WERTHAM
Well, the comic book publishers seem to think it did. They made a lot of money.

And here is our interpretation: