Diagram for Delinquents Update #28: The Not So Garden (of Eden) State

I am a New Jersey guy.

Ever since I began making documentaries I have investigated the obscure, forgotten, unexplored, but intriguing histories of the Garden State.

With my last two feature length films I profiled a Mexican aviator who crashed and died in the Jersey Pines in 1928 and a locomotive that fought its way through the Depression until its sad demise in 1941 when roads expanded and the automobile became the dominant mode of transportation. Before that I produced documentary shorts about two recurring phenomena in New Jersey: yard sales and eminent domain. In my web series MINICONCEPTDOCS I produced over a dozen doc shorts that profiled some aspect of New Jersey.

I had become the "New Jersey documentary guy" and I was proud of the designation. Still am.

With Diagram for Delinquents it might appear that I've left behind the New Jersey motif for now. But fear not my fellow lovers of all things Jersey. There are some very important and unique New Jersey aspects to our documentary. 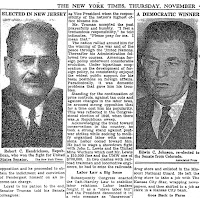 Foremost, again, is connected to the 1954 Senate Subcommittee Hearings on Juvenile Delinquency and Comic Books. The chairman of the committee was Republican Senator Robert C. Hendrickson of New Jersey. Senator Hendrickson was born close to me, in Woodbury, on August 12, 1898. The Senator was an accomplished veteran of both World Wars as well as the Korean War. He rose through the ranks of state politics, eventually earning his U.S. Senate seat in 1948, always keeping a residence in Gloucester County's Woodbury.

Senator Hendrickson became well known for his interest and work on the matter of comics and juvenile delinquency. One reaction to his work resulted in an interesting letter from the Girl Scouts of the United States of America. 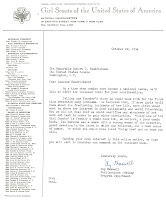 As a way to reach out to and educate current and potential Girl Scouts, the organization created a comic book about its founder, Juliette Gordon "Daisy" Low. The Girl Scouts believed in the positive qualities of what they had created and an issue was sent to Senator Hendrickson for review.

Two years after the hearings, Hendrickson, along with coauthor and journalist Fred J. Cook, wrote the Harcourt and Brace publication, Youth in Danger, reporting on the conditions of juvenile delinquency during the 1940's and 1950's as well as his experiences as a member of the Senate Subcommittee investigating comics.

During the early 1950's a number of organizations in New Jersey protested the sale of comics books in the state.

In 1953, The New Jersey State Federation of Women's Clubs, a group founded in 1894, called for legislators to enact laws to control the sale of comic books (or as they describe them: "filthy literature") to youths. It's interesting to note that while the NJSFWC wanted action, they did not condone censorship as a course of action. The New York Times reported on the resolution. Read more about it by clicking on the article to the right.

Another group, The New Jersey Congress of Parents and Teachers, took a more extreme approach when they petitioned the State Legislature to ban the publication and distribution of comic books as well as other objectionable media that presented indecent and obscene material. On October 22, 1954, the New York Times reported on the resolution. Read more by clicking the article to the left.

Also, before the hearings even opened there was the small issue of the aborted comic book burning event that happened in Rumson, New Jersey in 1949.

The idea came about during the brief trend of comic book burnings which fortunately flamed out as quickly as cheap pulped incinerates.

However, before the trend died out, leaders in town had decided to exercise their right to burn. The Cub Scouts planned to conduct a drive to collect comic books which depicted murderers and criminals and

were set to be burned in Rumson's Victory Park. Fortunately reason prevailed and the burning was canceled. As the brief article in the New York Times wrote, there was a disturbing twist to the event:

"A procession of Scouts to Rumson Borough Hall will follow and awards will be made to Scout dens which collected the most books."

The change of plans to not burn the comic books was written-up in the nearby local newspaper, the Red Bank Register. Read more about it by clicking the article to the left.

The calls for bans, burnings, restrictions, and laws on comics can seem quite alarmist now. But imagine what it must have been like for parents, educators, and concerned parties who were becoming increasingly terrified by a youth which appeared in jeopardy and out of control and a medium which seemed to be contributing to the issue.... Finding it hard to imagine?

Perhaps this will help: